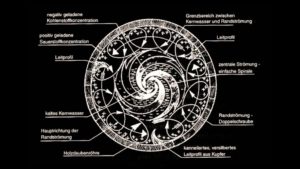 Rudolf Hess became convinced that the channelings of Maria Orsitsch were real when she channeled his deceased friend, Dietrich Eckhart. Orsitsch’s drawings of flying discs resembled the work of Viktor Schauberger’s Repulsine technology. The Nazi’s abducted, Schauberger and forced him to work for them. Schauberger had done quite a bit of research about vortexes in water which he later applied to turbines which generated lift. He invented several votex-based devices one of which he named the Repulsine. He is quoted as saying, “Birds do not fly, they are flown and fish do not swim they are swum.”

German scientists were developing disc shaped craft. Although extraterrestrials may not have been needed for development, according to Werner von Braun’s mentor, Hermann Oberth, “We had help from people from other worlds.” 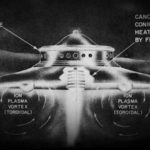 Hindu texts reference the use of mercury in flying craft. If electricity was introduced into a mercury vortex creating plasma, it would become very bright, as is often reported with UFOs

Hitler was developing advanced technology in a region of Poland known as Salacia. Although our strategic target was Berlin, Hitler was more about protecting the weapons technologies being developed in Salacia.

Of interest is the FBI website: The Vault at https://vault.fbi.gov/unexplained-phenomenon

It appears there was a network extending from Germany to Norway to Argentina to Antarctica. Germans had the technology but not the resources. 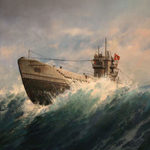 Germans used U-boats to create bases around the world and though the war seemed to have ended, Nazis went into hiding in Greenland, Canary Islands, Indonesia, Japan and Antarctica in the region now known as Queen Maudeland (which they referred to as New Schwabenland). Many U-boats were unaccounted for at the end of world war 2. They had huge cargoes of mercury. There is a documented U-boat wreck in Indonesia with mercury cargo as well as a U-boat sunken in a Norwegian fjord. Norwegian authorities were worried about the mercury cargo. Rat lines extended to Switzerland, Marco Spain and the Vatican. SS Officers went there and changed names and German scientists were brought to the USA under Operation Paperclip.

Admiral Richard Byrd investigated the base in Antarctica during Operation Highjump. He set up a base and then checked out New Schwabenland in 1946. He attacked the base he found there and was soundly beaten by the superior technology of the Germans. He returned home and in Santiago Chile in an interview stated that future battles would be fought by craft that could fly from pole to pole in minutes.

Also of note was the 1952 buzzing of Washington DC, resulting in the creating of the national security state. Movies at the time portrayed threats from another world to cover up the Secret Space Program.

From the Gaia website: During the furor of World War Two, German engineers created the world’s first flying saucers using information gleaned from ancient manuscripts, channeled information and possibly with the assistance of extraterrestrial beings. Despite these superior advances in technology, the German government surrendered. Meanwhile, the keepers of this secret technology fled to Antarctica. The series of events which would unfold from this action would pave the way for the establishment of a national security state and give new grounds for the German scientists to continue building out a secret space program. – See more at: http://www.gaia.com/video/german-flying-saucers#preview/128741