Unacknowledged is also available in book form on Amazon 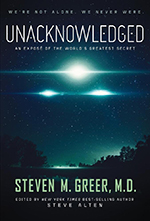 This book contains 10 times the information/documentation of the movie. The Biggest Lie in History is about to be Shattered. UFOs are real. Extraterrestrials have been interacting with humans since World War II. We mastered gravity control in 1954. Free, clean energy systems could have replaced fossil fuels long ago. In late June of 1947, three extraterrestrial craft were downed outside Roswell Air Force Base using a new Scalar radar system. Many more followed, revealing dozens of ET species and a Rosetta Stone to a new physics an energy generation and propulsion system responsible for interstellar space travel. This new system could easily replace all existing energy generation and propulsion systems on Earth and with them, the entire geo-political and economic order on our planet. No more external fuel sources. No need for oil, gas, coal, nuclear plants or the internal combustion engine. No need for roads. And no pollution. Period. We’ve been lied to. Purchase now on Amazon

Dr Steven Greer, the Center for the Study of Extraterrestrial Intelligence (CSETI) and the Disclosure Project 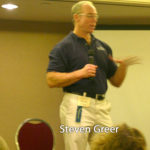 (Quoted from Wikipedia) Dr Steven Greer founded the Center for the Study of Extra-Terrestrial Intelligence (CSETI) in 1990 to create a diplomatic and research-based initiative to contact extraterrestrial civilizations. In 1993 Greer founded The Disclosure Project, a nonprofit research project, whose goal is to disclose to the public the government’s alleged knowledge of UFOs, extraterrestrial intelligence, and advanced energy and propulsion systems.The Disclosure Project was founded in an effort to grant amnesty to government whistle-blowers willing to violate their security oaths by sharing insider knowledge about UFOs.Greer says he gave a briefing to CIA director James Woolsey at a dinner party, although this was denied by director Woolsey and attendees. In October 1994 Greer appeared in Larry King’s TV special The UFO Coverup? In 1995, Greer was working as a physician at the department of emergency medicine at Caldwell Memorial Hospital,[3][16] where he was chairman. In 1997, Greer along with other members of CSETI, including Apollo astronaut Edgar Mitchell, made a presentation at a background briefing for members of Congress.  In 1998 Greer gave up his career as an emergency room physician, in favor of the Disclosure Project. In May 2001, Greer held a press conference at the National Press Club in D.C that featured “20 retired Air Force, Federal Aviation Administration and intelligence officers”. According to a 2002 report in the Oregon Daily Emerald, Greer has gathered 120 hours of testimony from civilians and various government and military officials on the topic of UFOs, including astronaut Gordon Cooper and a brigadier general. 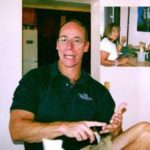 Dr Steven Greer founded the Center for the Study of Extraterrestrial Intelligence (CSETI) and The Disclosure Project, which seeks the disclosure of allegedly suppressed UFO information. He has retired from his career as a medical doctor.

Dr Steven Greer was born in Charlotte, North Carolina in 1955 and relates his experience of seeing a UFO at close range at the age of eight, which sparked his lifelong interest in extraterrestrials. Dr Steven Greer completed his internship at MAHEC University of North Carolina and received his Virginia medical license in 1989. That year he became a member of the Alpha Omega Alpha Honor Medical Society.