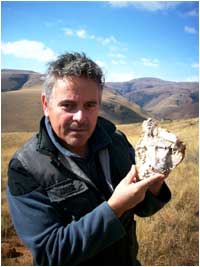 Michael Tellinger is a South African author, archeologist and politician.
Tellinger released his first SA record in 1981, HAZEL, nominated for the SARIE award in that year as best male vocalist.[citation needed] Later in 1981 Tellinger played the part of Joseph in the opening of the State Theatre in Pretoria. Michael Tellinger and Russell Stirling combined to become a successful rock duo during the early 80’s before splitting up in 1985.
In 2005 he published the book Slave Species of God based on the writings of Zecharia Sitchin, which propounded an ancient astronaut theory of human origins.
Tellinger is a proponent of contributionism, a social movement based on the African philosophy of Ubuntu.
Tellinger published his first book, Slave Species of God, in 2005. The work is the result of a 25-year study of the writings of Zecharia Sitchin, who claims to have translated ancient Sumerian clay tablets and theorized about the early creation of man by the Anunnaki.
Adam’s Calendar, published in 2008, discusses a stone circle rediscovered by co-author Johan Heine in 2003, which they claim date to 75,000 years ago.
Temples Of The African Gods, published in 2010, discusses the baKoni Ruins of Machadodorp, claiming they date to 200,000 years ago.
Tellinger also frequently publishes articles on the topic via his website.

In 2012 Tellinger founded the Ubuntu Party in South Africa, based on his principles of contributionism. It contested in the 2014 National Elections.