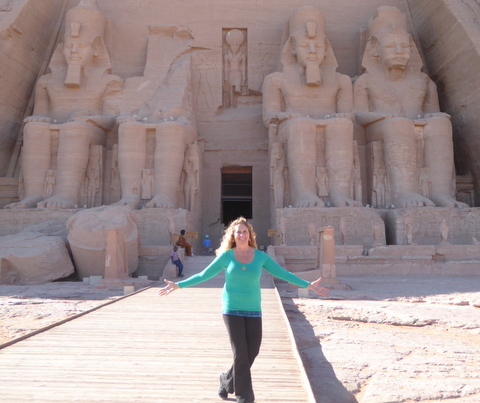 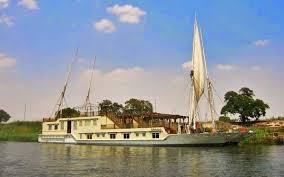 Last night we flew from Cairo to Aswan and then boarded the luxurious and comfortable Afadina, which is a private yacht provided by Quest Travel, where we will sail up the Nile for 8 days and visit all the sacred sites, until we reach Cairo again. The yacht has three floors with 16 state rooms below, and a luxurious dining room and sitting room on the second floor, with a long outdoor deck for dining and relaxing, including hot tub! It also has an upper deck that allows amazing views in all directions. 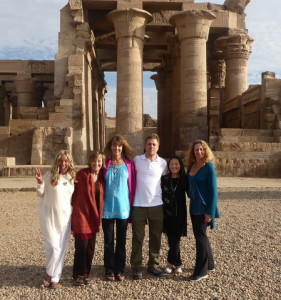 with the whole boat to ourselves, except a few additional friends of Mohammed, the owner of Quest Travel. There we many people I know that considered coming on the trip, but the negative media about Egypt had won, and out of fear, and other personal considerations, they choose not to go. I was concerned that the trip would be canceled, but Mohammed agreed to do the tour, with nothing in the tour excluded, even with the very small number. He company is created to serve people to have a full spiritual experience in Egypt, and that is what he is committed to do. I am coming to learn day by day what an amazing man he is. And I am so grateful..

On Day 3 we took a three hour bus ride to Abul Simbel, that features twin temples, at the height of 80 ft, which were originally carved out of the mountainside during the reign of Pharaoh Ramesses II in the 13th century BC, as a lasting monument to himself and his queen Nefertari, to commemorate his victory at the Battle of Kadesh. The complex was relocated in its entirety in 1968, on an artificial hill made from a domed structure, high above the Aswan High Dam reservoir. The relocation of the temples was necessary to prevent them from being submerged during the creation of Lake Nasser, the massive artificial water reservoir formed after the building of the Aswan High Dam on the Nile River. 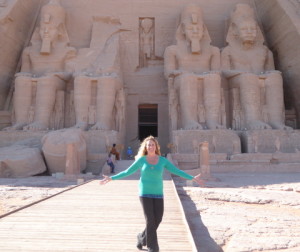 King Ramesses II, often call King Ramesses the Great,  is often regarded as the most celebrated and most powerful pharaoh of the Egyptian Empire. The early part of his reign was focused on building cities, temples and monuments. He established the city of Pi-Ramesses in the Nile Delta as his new capital and main base for his campaigns in Syria.

He was also a very busy guy as he had a whole host of wives that had produced 100 sons and 70 daughters during his long life, when he exited this world at 96 years old!

Sunrise on the Nile and the Temple of Horus

Sacred Ritual at THE ALTAR OF THE TEMPLE OF ISIS