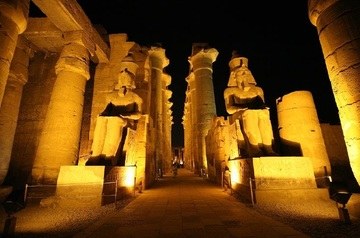 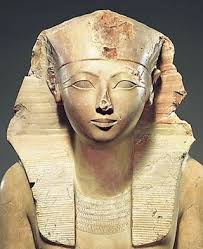 Anro, our amazing tour guide, Amro, shares that Hatshepsut is one of his favorite ruling Queens of Egypt, and we begin our day with a visit to her Funerary Temple, which is built into the side of a huge mountain near the Valley of the Kings. She was the 5th Pharaoh of the 18th Dynasty of Egypt, and came to the throne of Egypt in 1478 BC.  She is regarded as one of the most successful women pharaohs of Egypt, reigning over 20 years, which is longer than any other woman has.  But Amro shares that there’s much more that is very special about her.

Queen Hatshepsut  is considered to be a pharaoh who inaugurated a long era of peace.  While the pharaohs before her expanded the Egyptian territory and its wealth through war and conquering other areas, Hatshepsut took a different approach. Instead of going to war to obtain wealth, she invested in the Egyptian people, the country, and building commerce. She re-established international trading relationships lost 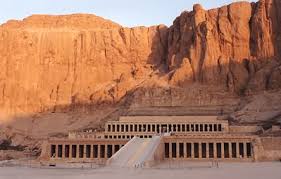 during a foreign occupation and brought great wealth to Egypt. That wealth enabled Hatshepsut to initiate building projects that raised the calibre of Ancient Egyptian architecture to a standard, comparable to classical architecture, that would not be rivaled by any other culture for a thousand years.

It’s interesting to see how history repeats itself. Our modern evolving civilization could benefit from the balance of the feminine principle in leadership to steer our country and our world in a whole new direction, similar to how Queen Hatshepsut turned Egypt around. The feminine focus would prioritize investing in healing and developing its society and it’s people, as well as building healthy relationships for mutually supportive exchange.  And potentially that time is coming!

Then we traveled to the Valley of the Kings, a valley in Egypt where, for a period of nearly 500 years from the 16th to 11th century BC, tombs were constructed for the Pharaohs and powerful nobles of the New Kingdom (the 18th to the 20th Dynasties of Ancient Egypt). The valley stands on the west bank of the Nile, opposite Thebes (modern Luxor), within the heart of the Theban Necropolis. 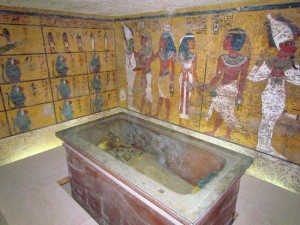 Here is why they know King Ramses II had 100 sons and 70 daughters, because they were all buried together there.  This is also where they discovered the tomb of King Tutankhamen.  Amro says that he suspects that there are many tombs still undiscovered in this area buried under mountains of sand, because in the temple of Abydos, where will be visiting tomorrow, there is a wall that lists all the ruling pharaohs through all the dynasties. And these have not been found! 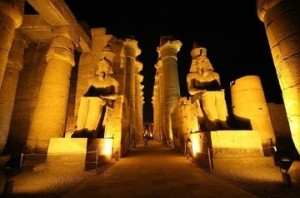 Our final treat for the night is going to the famous temple of Luxor at twilight. The lights on the temples emphasize the majestic beauty and magnificence of this temple. Unlike the other temples in Thebes, Luxor Temple is not dedicated to a cult god or a deified version of the king in death. Instead Luxor Temple is dedicated to the rejuvenation of kingship; it may have been where many of the kings of Egypt were crowned (as potentially in the case of Alexander the Great).

At the Luxor Temple, I allow myself to be taken on a mysterious journey in the temple by one of the guards. Many of the 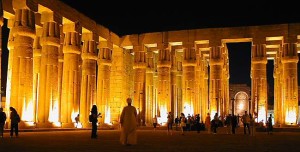 guards are trying to hustle you, giving you some sort of special treatment for a tip. But instead of ignoring this guard, I decide to find out what he wants to share with me. I allow him to take me out the back door of the temple, which is blocked to the public and then around to the side. He takes me to an image of a God with an elongated penis, and smiles. He then motions for me to take pictures underneath it. So in my usual style, I figure why not, and reach my hand up to it while he snaps a photo. A little humor in these serious temples is very good! 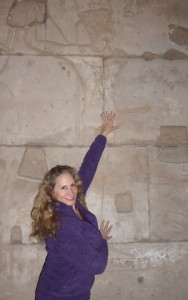 He then takes me to the back area of the temple and instructs me to sit there and meditate for a few minutes. This sounds like a good idea to me, so I obliged. I tune into my own connection with the temple.

Then the guard comes back and takes me back into the temple to a special area with a dark art space on the wall that looks like the Egyptian Solar Boat, and instructs me to put my forehead on it. Amro has shared that the Solar Boat was the gateway to the Divine, an ascension vehicle. I assume this part of the journey that he sharing with me, so I 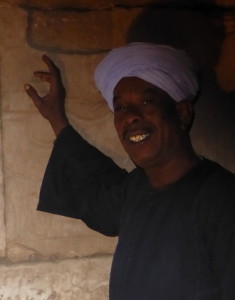 agree, and put my head on the wall, against the art, and go into my own spiritual
prayer focus. The guard goes away again leaving me with my head to the wall. A few people walk by while I have my forehead to the wall, and I assume I look pretty strange, and I laugh inside. Again I figure it is all part of the experience.

The guard comes back again in a few minutes. He then motions me to follow him and perform a sacred movement of repeatedly touching the Egyptian Solar Boat and then myself. Together we first touch our hearts, then touch the boat, and then each shoulder, and touch the boat, and then the art, and then our foreheads. We repeat 2 more times, and then we pause. He smiles at me communicating that he has just shared something very special with me. And then of course he puts out his hand. I give him 30 Egyptian pounds which is almost a two dollar tip, which is a good tip for him and he smiles. Spirit comes through in many forms, and I figured it was worth it.

Getting on the Boat on the Nile River and Abu Simbel

Sunrise on the Nile and the Temple of Horus

We are going to have a Private 2 Hour Experience in Temple of Isis!