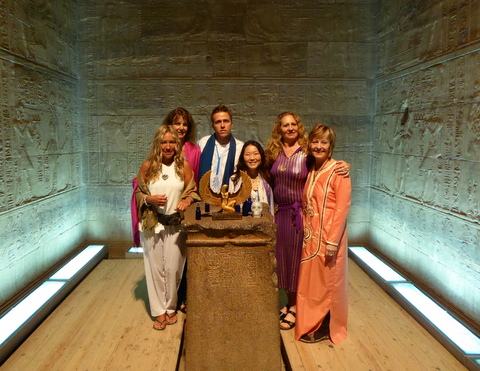 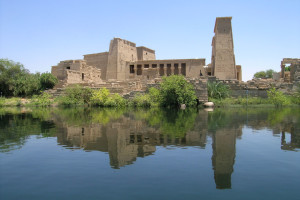 Even though I went to bed at midnight, I was up at 3:30 AM getting ready to leave the boat at 4:30 AM for the experience of a lifetime, to participate in Sacred Ritual, at the Altar of the Temple of Isis. Everyone in the group was excited, grateful, and holding deep sacred honor for this special privilege. We were adorned in whatever expression of ritual garments that we felt inspired to wear, and headed out for a one half hour bus ride to reach the dock, where we will sail to the island where the Temple of Isis resides.

We reached the island at 5:15 am in complete darkness and then walked in reverence, up the hill and towards the Isis Temple. The memories started activating, as I saw the processions towards the Temple that were performed in ancient times on the Day of Ritual. I also understood that on Ritual Day, it was commonly understood that we were to embody a deep connection with source, from the moment we opened our eyes from the dream world, all through the morning in preparation for the ritual, during all aspects of the ritual, and we continued with this spirit connection till the end of the day, when we journeyed back into the dream world. This ongoing spiritual embodiment was important to activate the power of the ritual, so the whole village held this focus, and honored this practice during the whole day. And that is what created the live geometric template over the village that held and activated power of the ritual. 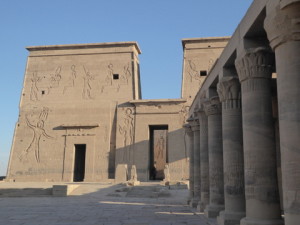 Going into the Isis Temple…

We were led into the Temple and back to the Holy of Holies, at the sacred altar of the Isis Temple. We took out our sacred objects that we had brought for the ritual and put them on the altar. I had brought a special crystal given to me the day before I left by another Sistar, Celestine Star, a Crystal Skull given to me by Spruce, and other sacred stones from beloveds Elson and Evalena, that I took to travel with me during this trip.

Then the 6 of us circled the altar. We co-creatively called in Sacred Space in the many traditions, forms, and heart shares that 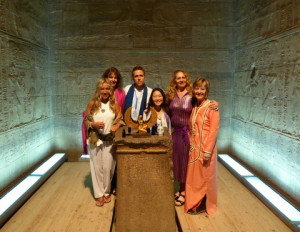 expressed a summation of our multi-spiritual lineages. I called in my Spiritual Guide Team, who I consider to be my guiding Spiritual Masters at this time: Metatron, Mary Magdalene, Archangel Michael, Isis, Babaji, QuanYin, Melchizedek, Aphrodite, St. Germain, and the High Galactic Counsel. We also called in our beloved family and friends to be present with us during this special activation. The energy and the frequency popped up to the next level and we were in the vortex. We all expressed from our hearts love and gratitude for the present moment. 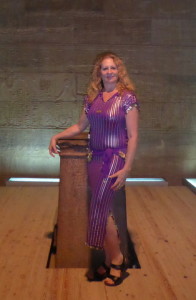 I personally experience a deep activation of my 3rd Eye, and the frequency within myself and the room raised to very high levels. The Divine Feminine was in full expression and with much love and beauty present. There was a perceptible vortex in the space, along with a comfortable and familiar creative flow, as we continued to spontaneously voice inspirational words, prayers, and sacred tones. Eunjung began to sing the beautiful Language of Light sounds, and Yves declared a profound offering from the Divine Masculine.

The prayers and offerings went on for 45 minutes, and then we all felt the energy shift, and it was time to close. Our guide, Anro, who had left us came back just then and let us know that in fact, it was time to close. He let us know that we just had an amazing opportunity. Normally during private visits,the Egyptian guards would stand watch, and would not let you put anything on the altar, or let you make sounds, and you’d usually have about 15 minutes max. But he took them for coffee and chatted them up, so time expanded impossibilities for us.

We started taking many photos in all the multitudes of options and expressions at the altar. Anro shared that we had turned from sacred ritualists into Japanese tourists!  It’s good to not take this all so seriously! 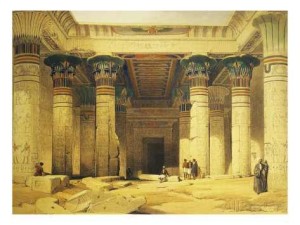 Then we took individual time to walk the island and temple, for our private prayers and tuning in. I went to the courtyard and had additional floods of creative thought/imaginative visions/memories of the immense Pageantry and Ritualistic Protocol that happened during those times. I saw myself as a solid member of the spiritual rites, and my dedication and seniority grew over the years, until I had key roles in performing the rituals.The rituals were very importance to keep balance, high alignment, abundance and positive creative manifestation in our lives.And everyone in the village participated, which created a strong positive unified field of harmony. I think modern society can all learn from this and bring this into current day lives. And thankfully many of us are! 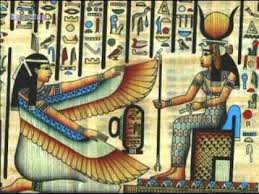 The Sphinx at Giza Plateau