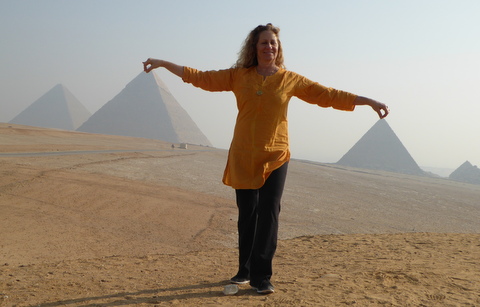 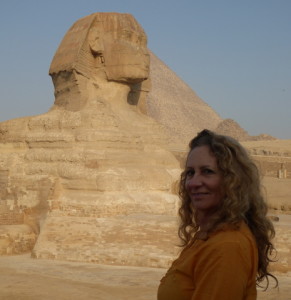 On the second day of our trip we have our morning breakfast and Mohammed, the owner of Quest Travel is not joining us because he has headed down to the Department of Antiquity to try to secure our private 2 hour experience on the Island of Philae, in the Temple of Isis. When I shared with him yesterday that my goal is to reclaim my memories of the ancient mystery schools of Egypt, he said he totally understood, and that he must arrange for that, even though it typically takes many weeks or months to do so. So we’ll see what happens!

But today is the day to visit the Sphinx. We go very early in the morning as it opens to avoid any crowds, and are fortunate journey close to the Sphinx with no other people around. Our tour guide Amro shares with us how they have found an open passageway at the base, and he suspects there is much to discover underneath the Sphinx, and in passageways and tunnels all over the Giza Plateau. But the government and heads of archaeology, have sealed up the passageway and have not allowed any the exploration. He suspects that the exploration would radically change the current story of the Sphinx that is generally agreed-upon now. For example they are claiming it to be only 3000 years old, but other progressive scholars and researchers document that it’s more than 10,000 years old. 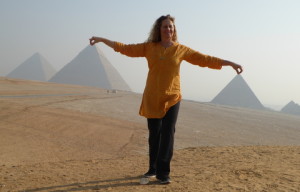 Anru also shares that there’s evidence that there is a second Sphinx to the right of the current one buried in the sand yet to be found. The Egyptians always built monuments in balance, and as the Sphinx is meant to be a guardian to the gateway of the divine, which is the Giza Plateau with the pyramids. It’s likely that there were two guardians on either side of the major passageway up to the pyramids. He says the pyramids were extremely important spiritual temples. He says they are not tombs for one King as modern Egyptologists proclaim, they are Ascending Chambers. We will visit the Giza Pyramid on the last day of our trip and have a special two-hour private experience/ritual/activation in the Kings chamber, and I will experience it for myself.

Landing in Cairo, at the world famous Mena House

Finally, our 2 Hour Private Experience in the Giza Pyramid!

Stargate Meditation #5 with “Special Transmission” from Temple of Salomea