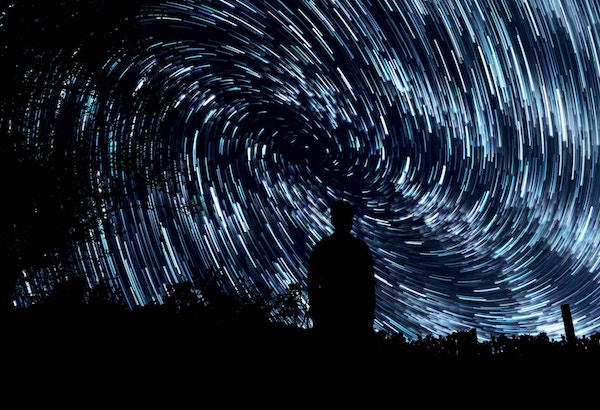 In order to clearly understand the forces coming into play in current and future paradigm shifts, it can be helpful to examine historical paradigm shifts. In the Futurica Trilogy provides just such an analysis. The authors show how the concept of God changes in the historical paradigm shifts from Feudalism to Capitalism. “In Feudal times, God was (in mobilistic terms) an assumed constant who’s existence was unquestionable…With the transition to Capitalism, the fixed structures which supported the concept of God collapsed…The authority of both Monarchy and Church rested ultimately upon the existence of something call ‘god’ with a capital G. God was the assumed constant and could therefore never be called into question under any circumstances. If doubt were allowed to spread, the whole power structure would have been in danger of imploding. As a result, of obstinate denials of any movement in the assumed constant and unwillingness to surrender the claims of religion,  Atheism was elevated to the status of a new axiom and became an oppositional and effective tool for the acquisition of power by the developing Bourguoise.” In other words, power in the old paradigm rested upon certain assumed constants and the historical paradigm shifts to the new paradigm revealed these were not ‘immutable truth’ but merely assumed and when this was shown to be the case, power previously held by church and monarchy shifted elsewhere.

The authors speculate that Czar Nicholas might have been able to avoid the Bolshevik Revolution by denouncing the authority of the Russian Orthodox Church, but could not, as doing so would undermine the basis of his own legitimacy as ruler. Consequently, he became a scapegoat when power shifted away from church and monarch to capital (whether or not it resided in a Capitalist or Communist system). 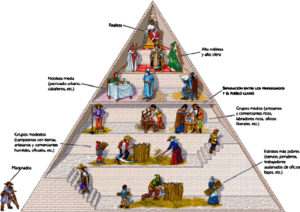 In Feudalism power lay in the land. This was inherent and had no price tag. In Capitalism power lay in capital. When the historical paradigm shifts occurred, aristocracy was revalued in terms of capital and the moneyed Bourguoise were able to purchase and renovate the estates formerly held by the feudal power class. Indeed, for a while it made sense the two classes to intermarry, as one could contribute their noble name in exchange for the other contributing their money and thus increase the standing of both families for different reasons. Paradoxically, the legal preconditions for the ascendancy of the Bourgoise were created through the attempts of the Aristocracy to preserve itself through state protection of private fortunes.

Eventually, the Bourgoise rewrote history in a way that portrayed the aristocracy and church as quaint relics of the past which had inevitably collapsed due to the newly assumed innate superiority of their own class and its nation-state. To quote the authors, “Man became God, science his gospel, the nation-state his paradise and capital his holy instrument of power.” 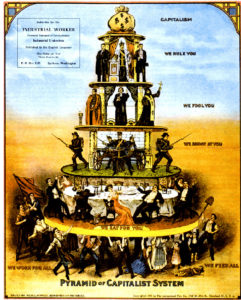 True to form, a similar pattern of historical paradigm shifts is showing up in the current transition from Capitalism to Informationalism (Netocracy). It is the very attempts by the Bourgoise to preserve their capitalistic power by controlling copyright and patent through legislation and law enforcement that provide the Netocracy with the legal basis for assuming power.

Curiously enough, this resulted in Etatism or belief in the State, governed by democratically elected representatives as the current form of ‘divine right’ that was previously accorded to royalty.  This was reinforced by the media, first in the form of newspapers and later as radio and television. While maintaining the appearance of freedom, these instruments of information dissemination were in fact, tightly controlled (at least in the beginning).  As market forces came into play and the need to appeal to wider audiences became clear, media began to have a voice independent of the existing power structure. (An example of this was the British ‘pirate’ radio stations playing American rock and blues in stark contrast to the BBC playlists).

The media has become a power unto itself, usurping power from the State. This can be seen when television and movie stars come out for or against certain political decisions. Previously, this would have been unheard of.  Nowadays the media assumes the role of keeping politicians in line. It has become quite conventional to assume that all politicians are corrupt and deplorable (whether they actually are or not). The problem is that in order to keep audiences engaged, the media must continue to create sensational scandals and has the side-effect of a cynical populace who sees no point in voting. What happened? The media quietly took control of the state. This explains quite a lot. A media star is now president; one that knew of the media’s need for drama and was expert at providing it, thus getting free coverage throughout the election.

Decision makers within the media are not elected officials. Consequently, it appears that if the media is literally running the show, it amounts to the death of democracy.  Fortunately, the media networks are not the only channels available to people. The internet serves as an alternate channel. The problem is that most users are not fully conversant in the technology. With the transition to Informationalism, power is tied to technological mastery. It also appears that with informationalism, power is shifting from democracy to a plurarchy. What’s the difference? In democracy an individual is subject to the decisions of the group. In plurarchy, the individual is no longer subject to the whims of the group, but is largely self-determined and power comes with mastery.

Discover the 4 Chambers of Your Warrior Heart

IN TIMES OF PARADIGM SHIFT TRANSFORM THE WORLD